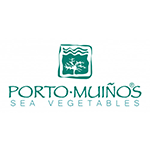 PORTO-MUIÑOS is a family company formed by husband and wife team Antonio Muíños and Rosa Mirás, who started to sell seaweed in 1998. During the first years they processed seaweed to sell it dried and canned. Nowadays their products can also be found in powdered, salted, and fresh forms, the latter being very successful. Porto-Muiños seaweeds are distributed not only throughout Spain, but also in different countries all around the world.
Antonio and Rosa base the success of their company on the study and popularization of the organoleptic characteristics of seaweed.
This expanding small company also devotes space and time to elaborate other sea products from Galicia, including delicacies such as Sea Urchin Roe, Monkfish Liver, whose taste and texture are highly praised by experts, Mussels with Seaweed, Seaweed Teas, Seaweed Pasta made with durum wheat, Tapas and other products containing all the taste and richness of the Atlantic.
Porto-Muiños continues to be loyal to its company policy, being research and the respect for the environment a priority. Studying, understanding and discovering new species of seaweed, unknown until now in cuisine, is one of the achievements that has allowed this Galician company to work with great chefs.

This website uses cookies to improve your experience while you navigate through the website. Out of these cookies, the cookies that are categorized as necessary are stored on your browser as they are essential for the working of basic functionalities of the website. We also use third-party cookies that help us analyze and understand how you use this website. These cookies will be stored in your browser only with your consent. You also have the option to opt-out of these cookies. But opting out of some of these cookies may have an effect on your browsing experience.
Necessary Always Enabled
Necessary cookies are absolutely essential for the website to function properly. This category only includes cookies that ensures basic functionalities and security features of the website. These cookies do not store any personal information.
Non-necessary
Any cookies that may not be particularly necessary for the website to function and is used specifically to collect user personal data via analytics, ads, other embedded contents are termed as non-necessary cookies. It is mandatory to procure user consent prior to running these cookies on your website.
SAVE & ACCEPT